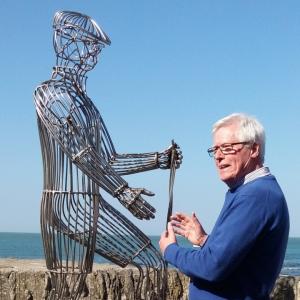 Its purpose is to promote Lynmouth’s role as Exmoor’s premier walking centre – passers-by are encouraged to be photographed shaking his hand.

“The Walker” has been installed where the Coleridge Way, Two Moors Way, South West Coast Path and Tarka Trail meet opposite the Pavilion on Lynmouth Waterfront. It was unveiled in May 2017 by John Craven of the BBC’s Countryfile. The statue stands on Lynmouth Esplanade and has become an iconic fixture, photographed by many.

Signage thanking the sponsors and partners in this project is fixed to the Esplanade wall. The walking man will spend his summers welcoming walkers and celebrating that Lynmouth is indeed an important centre for visitors to Exmoor. He will spend his winters just inside the doorway of the ENP Centre away from the gales and high tides which could damage him.